Regarded as perhaps the most famous actor of the 19th and early 20th centuries, Sarah Bernhardt appeared in numerous stage plays and some early motion pictures. Born 22 October 1844 in Paris, Sarah never had aspirations to be an actor as a child. She actually wanted to be a nun. This was due in large part to the fact that she was raised in a convent. Sarah's mother considered her a burden to her lifestyle and had her placed in said convent at a young age.

But Sarah's wily nature wasn't really suited to the sisterhood, a fact noticed by a friend, the Duke of Morny (Napoleon III's half-brother and one of her mother's lovers). He believed that acting would be the perfect vocation for her energetic disposition. So at the age of 16 she entered the Paris Conservatoire. For one reason or another she didn't do well at the Conservatoire, and she left in 1862. But it seems her time there, however unsuccessful academically, gave her the acting bug. Calling upon the help of the Duke of Morny again, she was accepted into Comédie-Française (France’s national theater company). Interestingly, again she did not excel. In fact, her on-stage presence was considered somewhat lack-lustre. Be it stifled or unsuited to the requirements of the Comédie-Française, Sarah rebelled, and even went so far as to slap a fellow actress. Consequently, her contract was terminated in 1863.

This might seem like the end of a potential acting career. But not for Sarah! She tried a different theatre company, the Théâtre du Gymnase-Dramatique. This was the beginning of sweeping changes in her life. She managed to remain with this theatre company for a time - impressive for Sarah! Then during this time she gave birth to her only child, Maurice. Perhaps this event helped settle her or she became happier with her place in the world, but something in her changed.

In 1866, Sarah's acting career truly began. She signed a contract to work with the Odéon Theatre. Her reputation quickly grew and in 1869 she starred in a one-act play Le Passant (The Passerby) by François Coppée, in front of an audience including Napoleon III.

Sarah had at long last found her true niche. By 1880 she assembled her own travelling theatre company and embarked on a world tour, which included Europe, Australia, Canada and the United States. She became especially popular in the United States. This tour made her an international star.

Sarah was always excited by new technologies. And around the turn of the century a new-fangled idea was being bandied about. The idea of motion pictures. Sarah latched on to the idea and she appeared in some of the earliest movie productions. These movies included a 1900 version of Hamlet (in which she played Hamlet) and La Tosca in 1908.

In 1905 Sarah injured her right knee while on stage in South America. This injury never healed and for ten years she battled with the pain it caused, until the leg became gangrenous and had to be amputated. But this didn't stop her. She continued to act, often while seated, or if need be while wearing a prosthetic leg (which she despised!). She also took up writing. Her memoir My Double Life was published in 1907. Her first novel Petite Idol followed in 1920. She also wrote a manual for aspiring actors, The Art of Theater in 1923. Sarah Bernhardt died that same year. After her death she was immortalised with a star on the Hollywood Walk of Fame. A fitting salute to a truly amazing woman!

On 16 May 1945 France issued a stamp in honour of Sarah Bernhardt. This truly gorgeous stamp was designed and engraved by Pierre Gandon based on a painting by Bastien Lepage. The stamp has a face value of 4f with a 1f surcharge for the benefit of the Grand Coq in Pont-aux-Dames. a retirement home for dramatic artists. 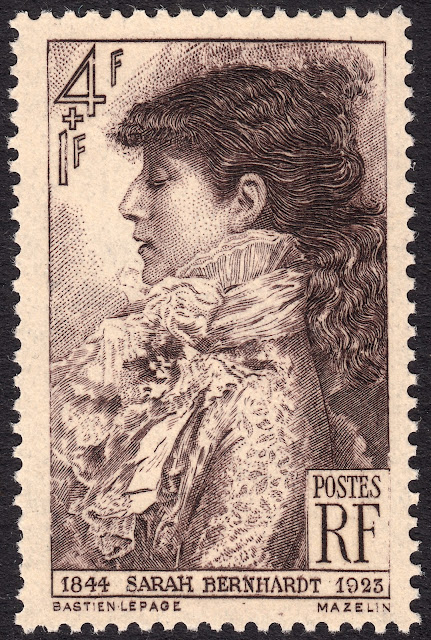 The attention to detail in this engraving is staggering. Sarah's hair has so much life and energy, one expects it to start moving about. Ans Sarah's clothing has been superbly rendered. 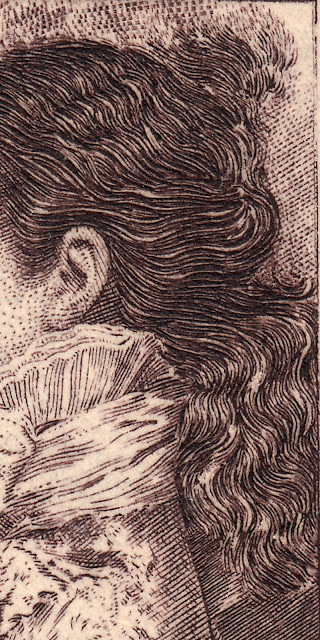 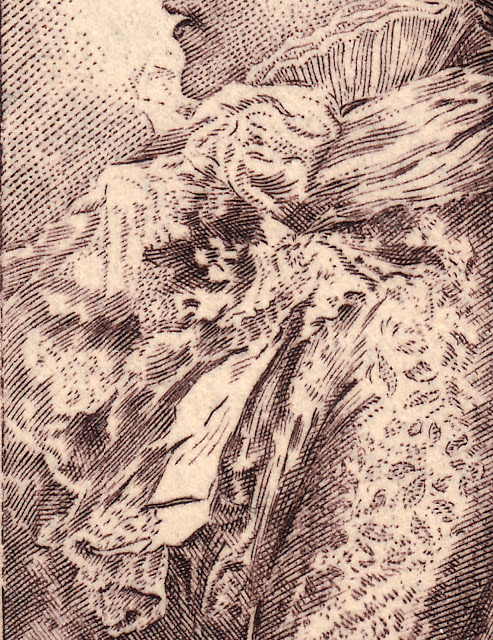 Notwithstanding the details, there is another very interesting aspect of this stamp. Something rather strange. Do you see it? Let's look down at the bottom right of the stamp. 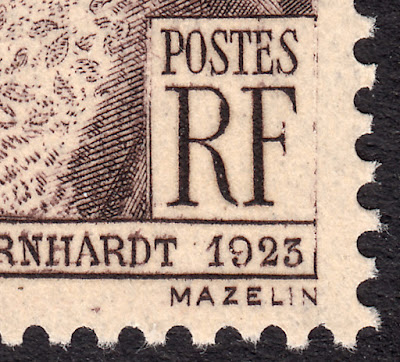 The stamp clearly has the name Mazelin as the engraver. Why is this so? Did I make a mistake earlier in attributing this stamp to Gandon? No, I wasn't wrong. Gandon did indeed engrave this stamp. So why isn't his name on it? Well, to answer that we need to remember when this stamp was engraved.

At this point in 1945 World War II was drawing to a conclusion, and in France the Vichy Government had been deposed. Anything done within the Vichy Government was now considered faux pas. This included stamps that Pierre Gandon engraved for the Vichy Government, particularly the Tricolour Legion. Click HERE to see my blog on these stamps. As punishment for his work for the Vichy Regime, Gandon had been banned from working for the France Post for a period of three months by the new administration. But Gandon had to keep working to bring in an income. So to deal with this situation his friend and fellow stamp engraver, Charles Mazelin, agreed to put his name to the stamp. Interestingly, to this day, the Stanley Gibbons France catalogue  still attributes the stamp to Charles Mazelin!

There is one last interesting note I'd like to include. Whilst searching the net for information on Sarah Bernhardt I found a nice image of Gandon's artist proof for this stamp. Interestingly, the proof does not include the 1f surcharge. It was obviously added later, probably by an in-house engraver? Or was Gandon called upon to alter the design to include the surcharge? 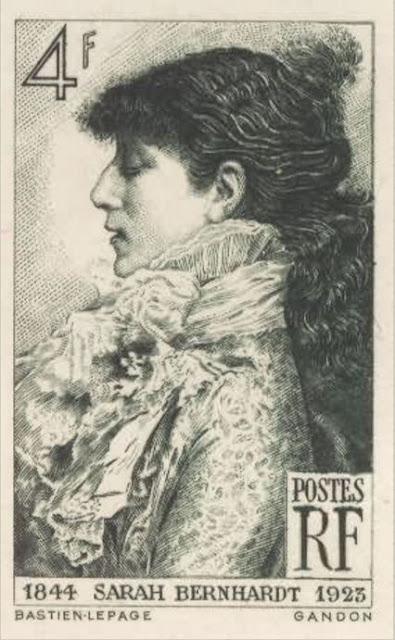 Email ThisBlogThis!Share to TwitterShare to FacebookShare to Pinterest
Labels: 1945, France