Torture, theft, and pilgrims. What do these seemingly disparate deeds have in common? For the answer we need to travel to the Occitanie region in southern France. Here you will find the lovely little village of Conques. A village nestled among rolling hills and crisscrossed with narrow medieval roads. And perhaps most importantly the Abbey of Sainte-Foy.

It all started in the 8th century. Fleeing from the Saracens in Spain, their lives in the balance, a small group of monks found a safe haven in Conques, and there built themselves an oratory.  Thus the Abbey was born. But what is an abbey without holy relics to worship? After two failed attempts to secure some desperately needed relics, the abbey authorities sent a lone monk on a holy quest to the ancient St. Faith's Church, in Sélestat. His mission: to acquire the relics St. Foy.

According to the story, St. Foy (or St. Faith) was a young woman from Aquitaine, who was arrested during persecution of Christians by the Roman Empire. Apparently she refused to make pagan sacrifices. The Romans even employed torture in order to force her to perform said sacrifices, but no dice. Consequently, St Foy was tortured to death with a red-hot brazier. Not a pleasant concept to envisage.

But back to the story of our intrepid undercover monk. Unfortunately for him his mission was somewhat trickier than what he had probably hoped. Believe or not, it took him nearly ten years to manage to get himself close enough to the relics in order to steal, then deliver them to the abbey in Conques. As a result of this brave, albeit somewhat dubious deed, the abbey became known as the Abbey of Sainte-Foy.

Over time the abbey became more popular as it was now a regular stopping point on a well-used pilgrim trail. Increased traffic to the church demanded a larger structure to accommodate more pilgrims. In the 11th century the original church was destroyed and a much larger building erected in its place. Significant additions were made to the abbey in the 12th century, further adding to its mystique. Today, visitors to the village can walk along narrow streets lined with gorgeous medieval buildings. I'd suggest doing a google image search of 'Conques'. I did, and fell in love!

On 18 September 1947 France issued a stamp featuring the Abbey of Sainte-Foy. The stamp was designed and engraved by Pierre Gandon. 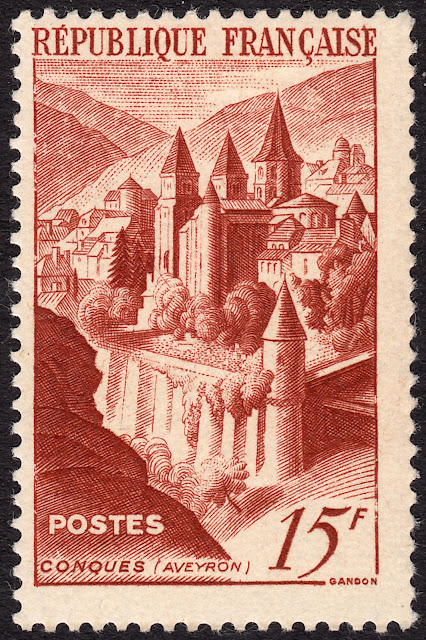 This is a stunning design which really captures quaint, almost fairy tale, quality of this beautiful French town. Je l'adore!

Email ThisBlogThis!Share to TwitterShare to FacebookShare to Pinterest
Labels: 1947, France